A Tale of Two Cellars: A City of Brampton Archaeological Project 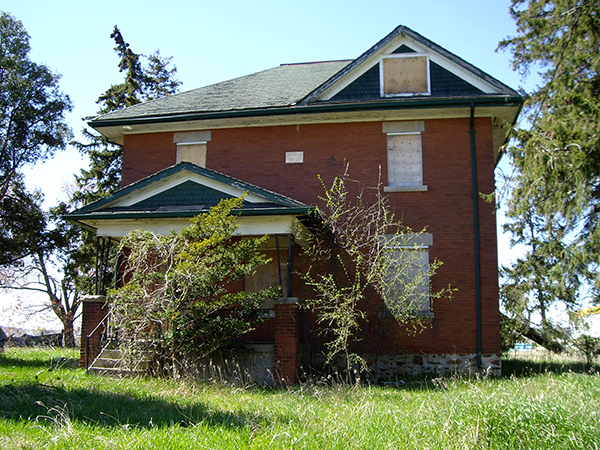 When This Land Archaeology Inc.’s crew first approached the house, it seemed typical of early 20th century brick farmhouses in southern Ontario. However, this home had a carved stone inlay indicating its name, Sprucedale, and the year it was built, 1915 (Figure 1, see above).

Often there were three houses on southern Ontario farms: 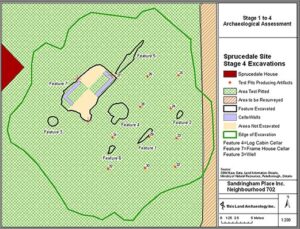 In 2007, 14 test pits produced evidence of an earlier homestead, which we dated to the early to mid 19th century. One test pit produced 366 artifacts. Further excavations revealed evidence of two cellars, a well, and four other features. The first cellar which we interpreted as that of a first-generation log cabin (#4 in Figure 2) was 15.8 feet long, 13.2 feet wide, and 18 inches deep (Figure 3). Clumps of gray clay in the excavated profiles (Figure 3) appear to be chinking from the log cabin, which was about 17 x 14 feet in size. Typically, a cabin would have had an open hearth for cooking and heating along one end wall and, along the other, a double bed for the parents and a loft for the children. 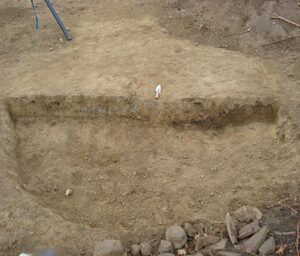 The excavation of this cellar resulted in the recovery of 3,790 artifacts typical of the early to mid 19th century. The artifacts recovered suggest a simple lifestyle. Ceramic tableware and decorative containers are typical of those from the first half of the 19th century. Locally made storage vessels are present but not in the quantities found in the later cellar. White clay pipes are abundant and exhibit a variety of decoration. Eight coins were found, which was an unexpectedly large number. I wonder if this log house had its floors made of green wood, which after a few years of occupation would have shrunk, creating cracks large enough that any coins dropped on the floor could’ve easily slipped into.

A second cellar (#7 in Figure 2) was found immediately to the northwest of the first. It was 26 feet long, 13 feet wide, and 5 feet deep. This cellar, which was interpreted as a second-generation frame house, had a cement floor, and its walls were made of field stone held in place by mortar (Figure 4). We recovered 5,504 artifacts from half of this cellar. Our investigations suggest this house was probably built in the 1850s and torn down after the completion of Sprucedale House in 1915. It would have had a kitchen and parlor on the main floor, and bedrooms on the second.

The artifacts recovered from the second cellar show significant differences when compared to those from the first. Ceramic tablewares were better made, more durable, and often decorated with moulded impressions, which became predominant after 1860. Evidence of coal oil lanterns and quart sealers for fruit and vegetable preserves suggest a better life. The presence of coal indicates its use for heating rather than wood. There was also a significant increase in the use of glass for both bottles and jars and thicker window glass.

To record the features at Sprucedale House, we contacted Bruce Davies at Cansel who brought a GPS unit that is accurate to less than one cm. This may be the first time that this leading-edge technology has been used on an archaeological site in Ontario.

It’s great to be writing and blogging again. Stay tuned for more including a new OLS series publication later this year.