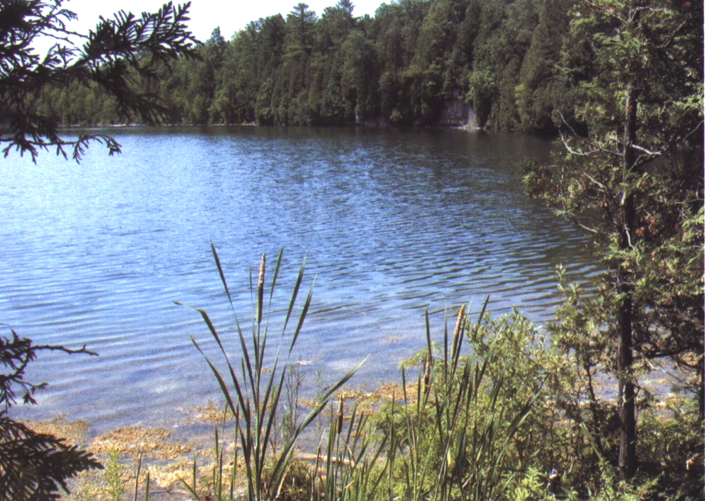 Welcome back to our continuing blog series on Crawford Lake. In an earlier post I noted that, while I was a graduate student based at Erindale College, U. of T., I was asked by Professor Roger Byrne to help locate an archaeological site he predicted would be found beside Crawford Lake. This small lake was situated near the edge of the Niagara Escarpment south of Campbellville, Ontario (Figure 1, above).

Studies of the sediments of Crawford Lake indicated that the lake bottom deposits were laminated, with a dark layer formed by the settling of silt when the lake was frozen in the winter, alternating with a white layer of calcium carbonate created from the lake water in the summer. Thus, two layers were formed each year. Early studies of these sediments by Dr. Jock McAndrews, a botanist at the Royal Ontario Museum, Dr. Roger Byrne, the geographer at Erindale College, and their graduate student Maria Boyko revealed that these layered sediments had been formed in the lake for more than 600 hundred years. 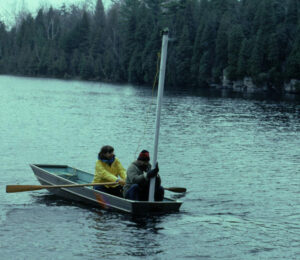 Cores of these sediments were taken with a Frigid Finger, an aluminum tube with a pointed wooden stopper at the bottom which was filled with dry ice. This was dropped through a hole in the ice in winter or from a small boat in summer into these varved sediments via a rope attached to the top of the tube (Figure 2). The sediments then froze around the aluminum tube, which was hauled back to the surface and packed in dry ice for transporting to McAndrews’ laboratory at the Royal Ontario Museum. In the lab, samples were taken of the layers at five-year intervals and were processed to allow viewing of the pollen preserved in each sample.

Pollen grains are tiny particles which are the male counterpart for the reproduction of plants such as trees and grasses. These pollen grains have distinctive shapes and sizes which can often be identified to the genus and species of the plant they came from. Scientists such as McAndrews and Byrne count the different kinds of pollen grains and are then able, amazingly, to reconstruct the environment of the area surrounding the lake.

Boyko’s studies of pollen from the upper layers documented the clearing of the land by early Euro-Canadian settlers. This clearing reflected a decline of Beech and Maple pollen from the mature forests around the lake and their replacement by grass pollens from the crops planted by the early pioneers.

It was Byrne who studied the sediments from approximately A.D. 1350 to 1650 and recognized that an earlier decline in Beech and Maple pollen and a subsequent rise in Oak and Pine pollen detailed the clearance of the land around Crawford Lake by Iroquoian agriculturalists who cut down these mature forests to plant crops of corn, beans, squash, sunflower, and tobacco (Figure 3). Byrne’s supporting studies of these earlier levels identified pollen grains from the Iroquoian crops. He also knew that corn pollen was relatively heavy and wouldn’t have been carried by winds nor subsequently deposited very far from the agricultural fields. It was this insight that led Byrne to ask me to help him locate the site he predicted would be found near the lake.

In my next blog, I will review the evidence for changing forest cover around Crawford Lake and the presence of pollens indicative of Iroquoian agriculture in the area.

Until then, stay well, and for additional reading I invite to you visit the home page of my website where we have divided my writings into six different categories of interest. You can also use the search function if there’s specific topics you’d like to learn more about.

Figure 1: A View of Crawford Lake.

Acknowledgements: All figures above courtesy of Charlie Turton

All rights reserved. The use of any part of this publication reproduced, transmitted in any form or by any means, electronic, mechanical, photocopying, recording, or otherwise, or stored in a retrieval system, without the prior written consent of the author and publisher is an infringement of the copyright law. To that end, every attempt has been made to give proper acknowledgement, and access appropriate permissions for quotes. Any oversights are purely unintentional. In the unlikely event something has been missed, please accept our regret and apology, and contact us immediately so we can investigate and rectify as needed. All of the quantitative factual information is recorded in various published and unpublished sources and can be provided u