It is time to move on from our consideration of the Draper site and look back other investigations I embarked on during my time as a graduate student in Anthropology at the University of Toronto. 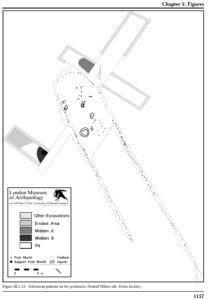 In 1973, while I was still a graduate student in Anthropology based at Erindale College, U. of T., I was asked by Professor Roger Byrne to help locate an archaeological site he predicted would be found beside Crawford Lake. This small lake was located near the edge of the Niagara Escarpment south of Campbellville, Ontario. Studies of the sediments of Crawford Lake revealed that these deposits were laminated, and that corn pollen and other pollens were discovered in the sediments of the lake dating from approximately A.D. 1350 to 1650. I agreed to help Roger, which ultimately resulted in my 30-plus years of research in that area and my 1998, 4-volume, 1,711-page study Iroquoian Peoples of the Land of Rocks and Water: A.D. 1000-1650: A Study in Settlement Archaeology published by the London Museum of Archaeology as Special Publication No. 1.

Yet this was not my first experience working in the Crawford Lake area and in my next two blogs I will detail these earlier investigations.

In 1969, I graduated with my B.A. in Anthropology from the University of Toronto and was admitted into the M.A. program. Professor Albert Mohr, one of the anthropological archaeologists who was based at Erindale College, offered to share his laboratory with me. So, I lived in Mississauga and commuted to the downtown campus for classes, as necessary.

In the summer of 1969, Professor Mohr hired me for two weeks to carry out an archaeological survey to find sites suitable for an archaeological field school he was to teach in each fall. The requirement was that the sites be within about a 30-mile drive from the college.

The field school was conducted on Saturdays from early September until early December. During this time, we excavated part of a longhouse (figures 1 and 2) and portions of two midden deposits (figure 1) containing large numbers of artifacts which suggested that the site had been occupied by Neutral people between about A.D. 1400 and 1550. 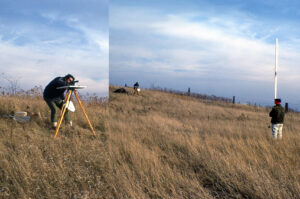 Figure 3: Mapping the Milton Site with a Plane Table, Alidade, and Stadia Rod

The excavations were designed to teach second-year Anthropology students the basics of archaeological field work. As it turned out it also provided me with a broader knowledge of field methods, due to Professor Mohr’s extensive experience in archaeology in California, the America Southwest, South Korea, and Japan.

Among the methods that were new to me were mapping a site with a plane table and alidade. This involved using an alidade on a level plane table and recording changes on elevation based on measurements taken from a stadia rod held by another student (figure 3). It was amazing how much time and effort was involved in mapping sites more than 50 years ago compared to today when we can download mapping for many properties in southern Ontario from a variety of websites. 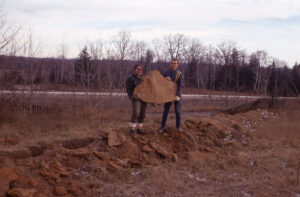 I also learned about continuing excavations even if the ground was frozen. Professor Mohr taught us how to use pickaxes to carefully remove the top two inches of frozen soil so that we could record information in the unfrozen soil below (figure 4). That said, such methods would be highly frowned upon today.

One of the challenging aspects of our work at the Milton site was that an avocational archaeologist teaching a class in archaeology for a local community college conducted excavations directly adjacent to ours on a Sunday following our Saturday excavation, a clear breech of ethics. As a result, this individual’s membership in the Ontario Archaeological Society was revoked. Upon reflection, at least then there was more accountability I suppose.

Next time we will examine the 1970 excavations at the Brown site, a historic Neutral village located about three km north of the Milton site.

These early days truly captivated my growing interest in and appreciation for Ontario’s rich history through archaeology. And here I am today, 50-plus years later, working on the fourth book in the popular series, sixth in Our Land Speak series overall, soon to be seven with the next occasional paper in the works as well. I look forward to sharing more on these projects soon.