An Artist’s Concept of the Draper Site

I saw our work at Draper as an opportunity to have Ivan Kocsis, a very talented artist in Hamilton, create an artist’s conception of what the Draper site might have looked like after expanding five times to become a very large village of almost 2,000 people.

I collaborated with Ivan to create a drawing which portrayed the village from a birds-eye view from north end of the site looking south. This illustration is shown here as Figure 1 above, the feature image of this blog post, and it was used as the cover and frontispiece of my 600-page 1985 publication on the houses and palisades of the Draper site. The Museum of Indian Archaeology (London), of which I was Executive Director, purchased the rights to use this drawing, so they could promote an awareness of what Draper may have looked like. This illustration has generally been very well received and has been used, with permission and proper acknowledgement, in a relatively large number of textbooks on archaeology, many published in the United States.

One of my colleagues has suggested that this illustration provides an overly optimistic vision of Draper. His concern was that it is possible that not all the houses at Draper village were occupied at the same time. In my 600-page volume, I do address this though, and I discuss, among other things, the fact that some of the houses had additions made to them while one had been shortened.

The success of this conceptual illustration is also manifested by the creation of a somewhat similar full-colour mural of another artist’s rendering of the Draper village in the new First Peoples Hall in the Canadian Museum of History in Hull, P.Q.

Unfortunately, at the same time, this image of Draper has been used by one private, for-profit consulting firm—Archaeological Services, Inc.—in three separate projects with no credit being given to the artist, to the museum, to myself as excavator of the site, nor to its use on the cover and frontispiece of my 1985 publication. Even more surprising is the fact that this drawing has been photo-shopped to obscure certain aspects, presenting a false view of the village. Yes, this happens in other industries as well. And I rarely comment publicly on this aspect of our trade. I am proud of the body of work I’ve engaged in and reported with integrity. It is true that digital files are so much easier to access these days, as is copying other’s work. However, it’s equally quite to doable, and more professional, to seek out permission to use even portions of copyrighted work and acknowledge appropriate credit where it is due. 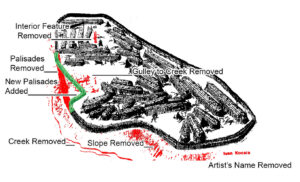 My facsimile of the photo-shopped illustration is included here as Figure 2. A close inspection of this figure reveals several features of the site which are incorrect. It does not show that the site is located beside a steep slope, that there is a creek in the valley bottom, and that there was a gulley which provided access to the valley bottom and its source of water. You can also see that the location of a section of palisades has been changed in a way to reflect the interpretations of the expansion of the site in my 1985 publication, which was written at least six years after Ivan Kocsis prepared this illustration. What is most ironic is that the new interpretation of the sequence of expansions presented in my 2020 publication matches the illustration produced by Kocsis. This photoshopped image remains as a permanent testament to a deterioration in the conduct of Ontario archaeology in the first two decades of the 21st century.

My attempts to rectify this has not been successful. Regrettably, legal action is not possible since copyright was retained by the artist, Ivan Kocsis. Otherwise, on principle alone, I would have pursued this further. *For those interested, at the end of this article, I have listed three areas where this plagiarized image can be found.

Granted, I share this blog post perhaps out of frustration, yet as well due to my growing concern about the changes in the practice of archaeology in Ontario. Plagiarism is becoming an increasing problem by, not necessarily all, but some of the younger-generation archaeologists, their protégés, and employees who feel free to continue this practice without much regard or respect for others, the authors of said work, and the general public. It is possible that they did not receive adequate training as part of their university degrees. And innocent oversights can be corrected usually quite quickly and on agreeable terms. That said, it does make the problem far worse,  if those governing bodies which profess to maintain the ethical practice of archaeology cannot be counted on to end such practices by educating and disciplining the offending individuals, which so far seems to be the case.

Wrapping up on a positive note, I would add that I am still confident that this will not deter the many Ontario archaeologists and their teams in the field who care deeply about maintaining ethical relationships with their colleagues, and whose passion it is to responsibly learn all they can about our history, and share it with the public to appreciate as well.

I am committed as ever in creating an expanding professional space for my work through Our Lands Speak Popular Books and Occasional Papers in Ontario Archaeology.

Thanks kindly for appreciating the depth of my work, and my ardent effort to provide you with professional publications and reports of archaeological studies which exhibit the integrity and professionalism that we should all expect.

*This plagiarized image can be found on: