Evidence for Indigenous Warfare at the Draper Village Site Part 1 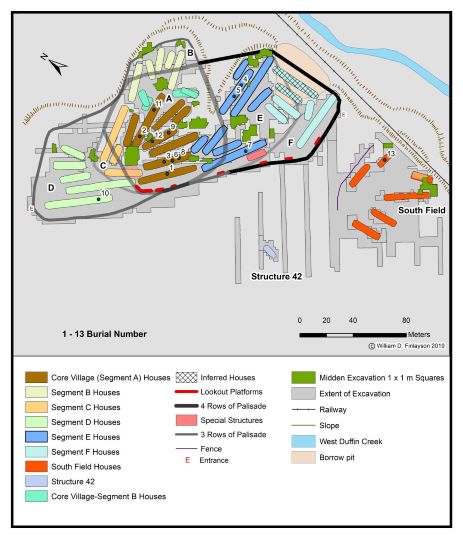 In my last two blogs, I examined evidence for the use of special structures which assisted in the defense of the Draper site. This included palisades, sometimes with catwalks inside which served as platforms to defend the villages. These catwalks provided a strategic location for villagers to stand to fire arrows down at attackers, and as a place to stockpile rocks to hurl down on these attackers; they also stored pots of water there to douse any fires set at the base of the palisades. In addition, I discussed the deliberate placement of longhouses to create lengthy, narrow, easily defended corridors to restrict the movement of invaders if they breached the palisades.

In this blog and the next, I will discuss the actual evidence for warfare which we recovered from our excavations at the site. There are two different kinds of such proof. First, there is evidence of injuries to individuals who were victims of warfare and, secondly, there are fragments of human bone scattered throughout the village, which we interpret as an indication of the remnants of the torture of captives of this warfare.

This isn’t an easy part of any country’s history to explore let alone read about or appreciate, however, it does help to understand the past in a way that gives clarity to the present and future generations of its people.

As archaeologists, we don’t always know what we’re going to come across in our work. As such, we take great care and respect in excavating and preserving our findings. Some of our evaluations may be considered professional interpretations due to missing data, yet others present with such clear fact as indicated here that there is no other side but a single truth.

Warning: The balance of this post is more graphic in detail and may be uncomfortable for some readers.

To date, evidence for individuals injured or killed in warfare is relatively rare among the Ontario Iroquoians. A burial was found at the Miller site, a Pickering substage village of the Early Ontario Woodland Tradition located further south on Duffin Creek, excavated by Walter Kenyon of the Royal Ontario Museum in the late 1950s and early 1960s. This was the burial of an individual who had been shot with an arrow and the tip of this chert artifact was still embedded in his vertebral column. This burial was discussed by Nancy Ossenberg who analyzed the burials recovered by Kenyon. 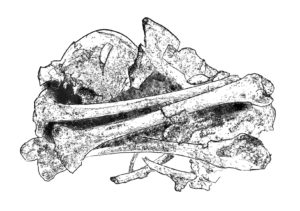 Our excavations at Draper recovered the burial of a male who was estimated to be 50 to 60 years old who was discovered as a bundle burial in House 6 in the Core Village of Draper. In bundle burials the body is usually dismembered and defleshed and the bones put in a pile, probably wrapped in a hide or bark and interred in a pit, in this case inside House 6. Historical documents for the Huron-Wendat report that individuals who died violently were not buried in the ossuary where most villagers were interred.

The male in this bundle burial appears to have been shot in one leg, perhaps while attempting to flee, the project point still being embedded in the neck of his femur. There was evidence that he was subsequently speared in the chest and was scalped. It seems likely that dismemberment of the body was undertaken by villagers in preparation for burial. Clearly this individual was a victim of warfare which involved the Iroquoians who occupied the Draper village in the 16th century.

In my next blog, I will examine the fragments of human bone scattered across the Draper site as further evidence of warfare by the occupants.

My thanks to Leslie Town for preparing the sketch of Burial 6.

We are thoughtfully and humbly committed to searching for the truth, whether it be in Indigenous history or Euro-Canadian history of the 19th century Ontario.