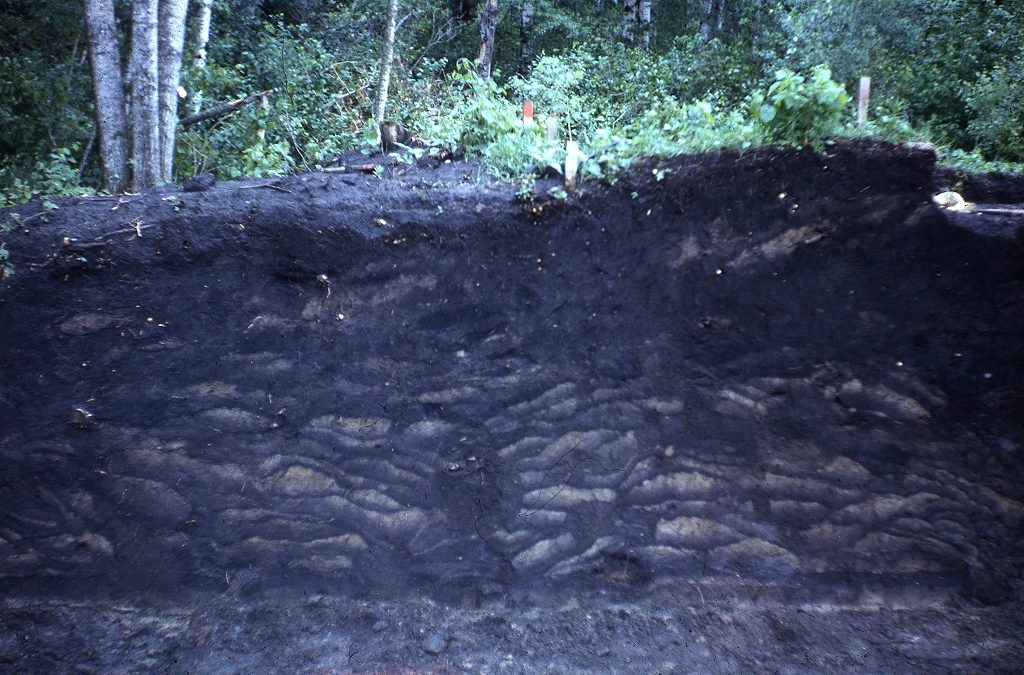 Thanks for joining me again this week, as I share with you my discoveries around

the excavation of burial mounds.

Burial mounds are a unique burial practice of a few pre-contact Indigenous peoples in Ontario. These groups would bury their dead in, or under, mounds of dirt which resulted in earth structures. There were two major areas in Ontario where construction of burial mounds occurred. In Southern Ontario, such mounds were the influence of the Hopewellian Mound Builders from Ohio. This occurred mainly in the Rice Lake area. These mounds were constructed in the first few centuries of the first millennium A.D. In Northern Ontario, mounds were the influence of Hopewellian Mound Builders of Minnesota, and occurred along the north side of Rainy River, west of Kenora. Again, these were constructed in the first millennium A.D. Walter Kenyon, of the Royal Ontario Museum pursued an avid interest in mound burial and has excavated a number of these earthen structures. 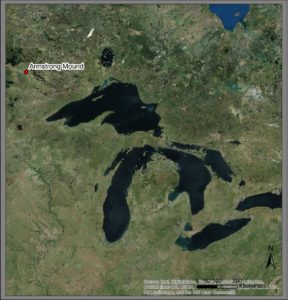 I was privileged to join Walter Kenyon’s crew while we undertook the excavation of Armstrong Mound, on the Rainy River, near Barwick, Ontario. Kenyon had determined that the Armstrong Mound was one of 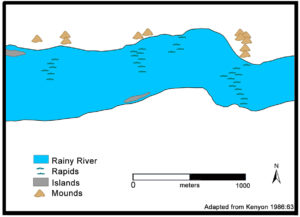 at least 11 mounds adjacent to the Long Sault Rapids on the north shore of the river.

One of the most interesting aspects of the Armstrong Mound was the way in which it was constructed.  Walter explained to us that in his previous experience of digging mounds, was that they had been constructed by the mound builders carrying basket loads of dirt to create the mound. However, this one was different. It was apparent from a close examination of the profile of the mound that it had been created by cutting sods from a nearby grasslands, and piling these on top of one another. Most unusual was the fact that the sods were inverted with the grass side down. Thus, when viewed in profile the typical soil profile was upside down. Can you imagine that view? Attached is a picture.

Walter’s excavations were published in 1971 and were also summarized in his seminal study of burial mounds in Ontario, which was published in 1986. The publications provided information on the excavations based on Walter’s laboratory study of the artifacts and burials recovered. These revealed that the Armstrong mound produced three discrete clusters of burials. Burial 1; comprised of six individuals. Burial 2; of one individual. Lastly, burial 3; of six individuals. An in-depth study of the artifacts recovered from the mound suggested it was constructed by peoples of the Laurel Culture, which occupied much of Northern Ontario between the last few centuries BCE. (Before the Common Era, also known as BC) and the end of the first millennium CE (Common Era, also known as AD). 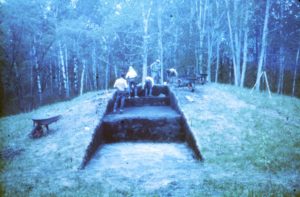 One of the results of Walter’s study of Rainy River mounds was that Parks Canada designated these a National Historic Site in 1970. More recently, the mounds have become the site of a tourist attraction, featuring a modern museum, and a tour of the more prominent mounds. The site area is commonly known as Manitou Mounds Historical Centre; the local Ojibway who operate the site call it Kay-Nah-Chi-Wah-Nung which means “the place of the long rapids.”

I hope you enjoyed learning about burial mounds. If you know someone else who would appreciate this blog, feel free to share it. If you have questions or want to know more, feel free to reach out to me.

Until next time friends,