of Patterson Village. There were three other sources although one of these related to the post-Village occupation of Houses 17 and 18 by farm-hands working the agricultural fields of this farm. 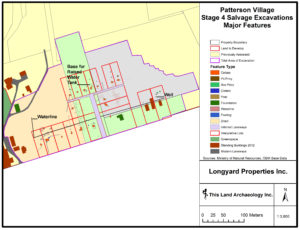 A second source of water was a well lined with yellow brick. It was located about 20 m northwest of House 18. We excavated the upper portion of this well by hand and then had the gradall section the well with its bucket. The well was 1.5 m in diameter and almost 5 m deep (Figure 1, Plate 1). We recovered over 1,700 artifacts from the well which were generally similar to those found in the cisterns and cellars we excavated. 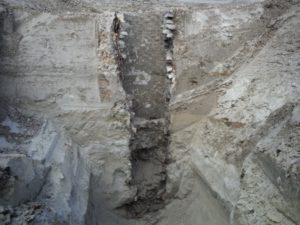 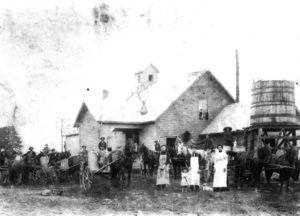 I found the most intriguing source of water from what I inferred to be a raised water tank. The base of this inferred water tank was comprised of nine large post moulds in a rectangular pattern found to the northeast of House 5 (Figures 1 and 2 ).  Archival research discovered a historical photograph of a 19th century 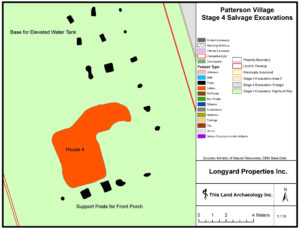 farmstead with a water tower located beside the house (Plate 2). This was comprised of a large wooden tank supported by posts. This supports our interpretation of this post pattern as the base of such a water tank. 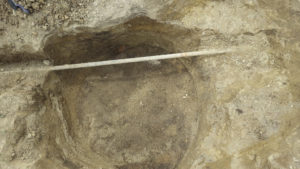 The final source of water was a galvanized metal pipe which carried water from Patterson Pond to Houses 17 and 18. There are historical documents indicating that water was provided to the manufactory by means of a waterline and a hydraulic ram, a type of water pump. We found this waterline which ended behind House 18 after extending 330 m east from a northwest-southeast line which had been partly destroyed by the farming of the site. This waterline transected one of the cisterns (Plate 3) indicating it was constructed after the filling-in of this cistern after the abandonment of the Village.

I hope you’re enjoying the Our Lands Speak series. If you know someone else who would enjoy this blog, feel free to share it. We also welcome your comments and feedback.