Our Lands Speak: An Unusual Gravestone in Southern Ontario 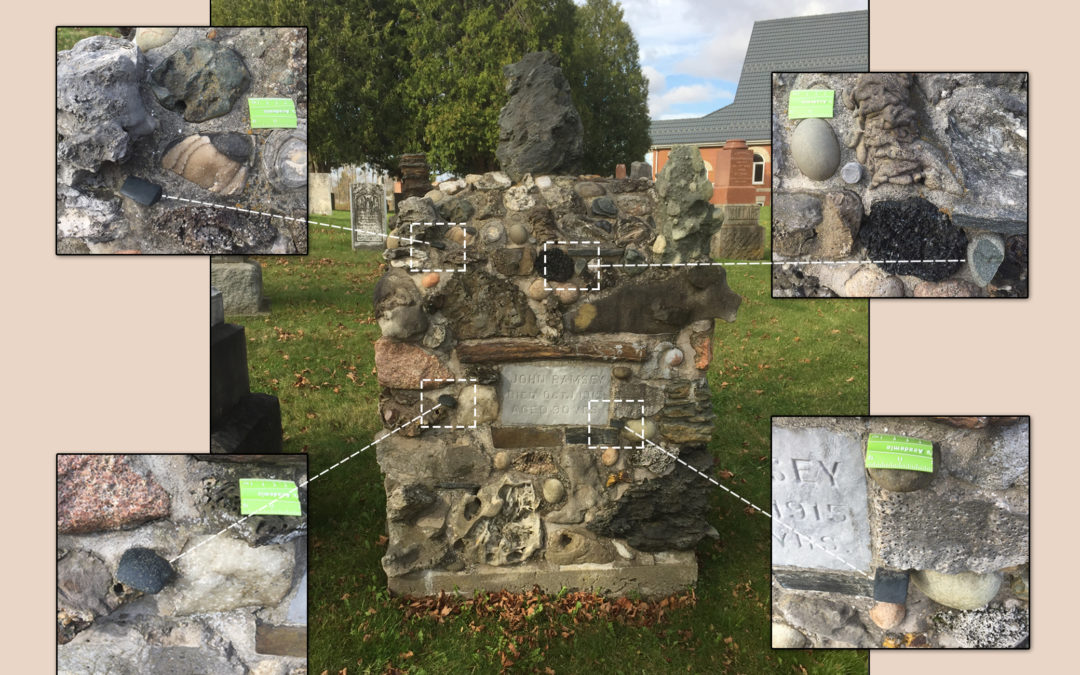 Thanks for joining me again as we explore another fascinating graveyard find.

In the late 1990s, a friend Bill Gregg from the Halton Region notified me of a very unusual gravestone in the cemetery at the Ebenezer Church, a few km north of Campbellville, Ontario. 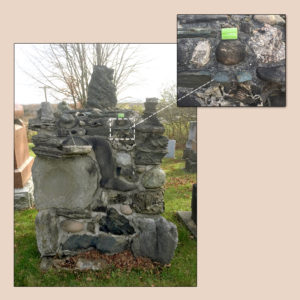 Special thanks to Leslie Town for assistance in creating the two plates.

A recent visit to this cemetery revealed one of the most remarkable gravestones I have ever seen. It marks the grave of John Ramsey who died on October 1, 1915 at age 90. The grave stone is 137 cm high, 137 cm wide, and 124 cm depth. It was constructed on a cement pad and is comprised mostly of unusual limestone rock formations, presumably curios collected by Ramsey during his life on a farm near the edge of the Niagara Escarpment. What is most astonishing about this grave marker is that it contains six stone celts (axes or adzes) which are placed on the front and one side of the grave marker. These celts are reminiscent of the types of celts we have found on neutral villages which date to the sixteenth century in the area north of Highway 401. Historical research shows that Ramsey lived a short distance north of Ebenezer church; twenty years ago, when I was doing active fieldwork in the Crawford Lake area, I would have visited his farm to see if there was a neutral village there.

Unfortunately, I am no longer able to visit this farm and pursue further active fieldwork in search of more villages. Why? Because it would create an encumbrance for the current and future landowners. This might also cause a significant reduction in the value of the land, should the property be sold for any kind of future development. I cannot in good conscience create such an impediment on an unsuspecting landowner just to pursue my research interests, albeit that this would add to our knowledge of the more than 76 Iroquoian sites as described in my 1998 4-volume study called Iroquoian Peoples of the Lands of Rocks and Water: A Study in Settlement Archaeology, A.D. 1000-1650. In this book, I specifically discussed the occupation of the northern part of this area and had noted the significant increase in the number of celts on archaeological sites just prior to the arrival of European trade goods in the area.

As owner of an archaeological consulting company we must weigh all considerations before a dig, recognizing, in part, that the presence of an archaeological site on a property can reduce that property’s value by several hundred thousand dollars due to the increasing excavation requirements mandated by the Ministry of Tourism, Culture and Sport. That’s a huge monetary decrease. The net result is that I can no longer undertake field surveys to explore the occupation of large parts of Southern Ontario which are in private ownership. As such, our knowledge about the occupation of these lands by Indigenous Peoples over the past 12,000 years will, for now, remain a mystery.

What are your thoughts? Feel free to comment and share our blog. If you are enjoying the Our Lands Speak posts, you can pick up a copy of the first book in the OLS series from my publisher’s bookstore.

Until next time friends,