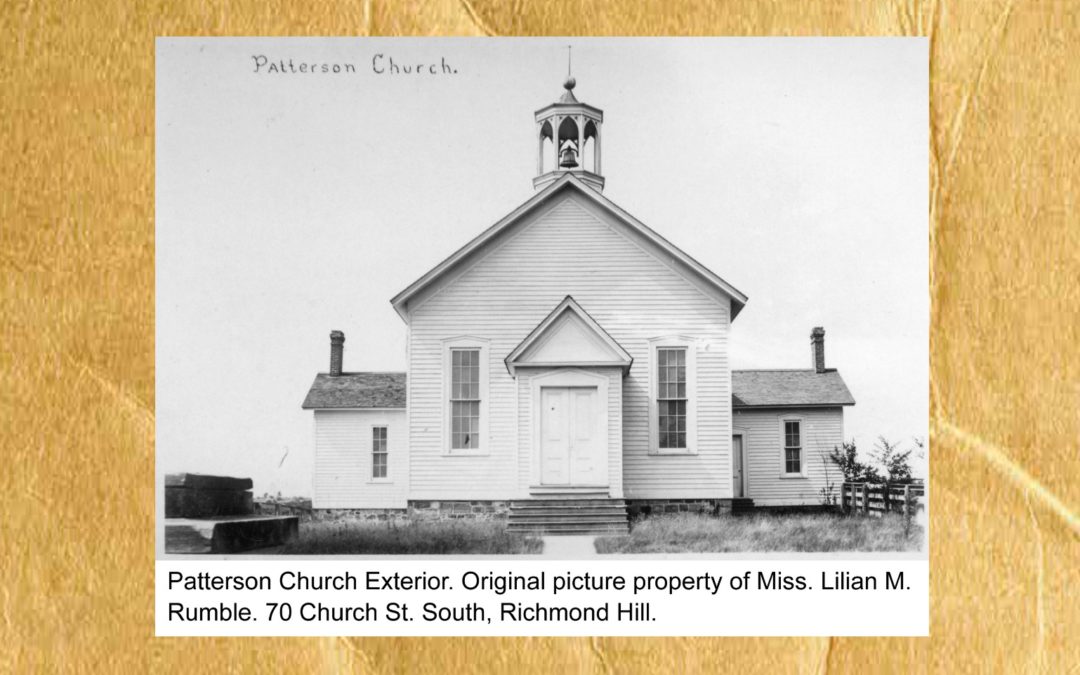 The church was located near the eastern end of the village, facing what is now

Major Mackenzie Drive. The church was discovered during our excavations of the East-West Corridor, one of the priority areas of the village to be investigated to allow for the installation of services to those parts of the subdivision to the north.

The remains of the church were originally observed as a large, dark brown stain in the yellow subsoil.  Further excavation revealed a structure defined by mortared stone foundation walls which defined a rectangular structure 14.3 m long and 9.0 m wide. There was a small anteroom, perhaps a waiting room or foyer, extending from the northwest corner of the building which was 5.0 m wide and 5.0 m. long.

One of the fascinating features of this building was a rectangular pad of two layers of red brick, 2.6 m by 2.3 m, located near the back of the structure. The function of this brick pad remains unknown. Could it be the base for the organ? 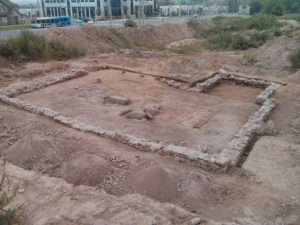 Our investigations revealed evidence that the church burned down; we recovered tens of thousands of machine-cut nails, many of which were burned and therefore not coated with rust. A portion of the northeastern wall of the stone foundation was charred and the subsoil was red from the heat of the fire.

I originally thought that this building may have represented a workshop for the village; however, Ruth Redelmeier told me that her research revealed that the church was located near the historic plaque erected on Major Mackenzie Drive just to the west of this structure. Ruth also provided the above picture of the church from her files.

This picture showed that the church structure was slightly different than what we were able to discover from our excavations, in that there was a second anteroom extending from the northeast corner of the building. A close examination of the picture indicates that the main structure and the northwestern anteroom clearly had stone foundations the upper portions of which were constructed of rectangular-shaped field stones, a feature not apparent in those portions of the foundation which survived. The picture also shows that the anteroom to the northeast did not have a stone foundation which explains why we did not find this part of the structure in our excavations.

The recovery of two coins 20th century coins clearly suggests that the church continued to be used after the closure of Patterson Village.

Two artifacts were discovered which makes it likely this had been a church. One was a small cluster of burned pages of a bible, some of which are legible. The second item was a small lead cross with a small hole for suspending it probably from a necklace. This lack of diagnostic artifacts is another poignant reminder of the difficulties of identifying the functions of Euro-Canadian buildings without supporting historical documentation.

I again acknowledge Ruth Redelmeier for her assistance in providing information from her research into Patterson Village and the Patterson & Bro. Manufactory, especially the Church, which has greatly assisted in our understanding of the Village.

Thank you for your interest in exploring the archaeology and history of 19th Century Ontario, specifically Patterson Village, Vaughan.

Our heritage is vital to our history and our future, and there is much more to come.