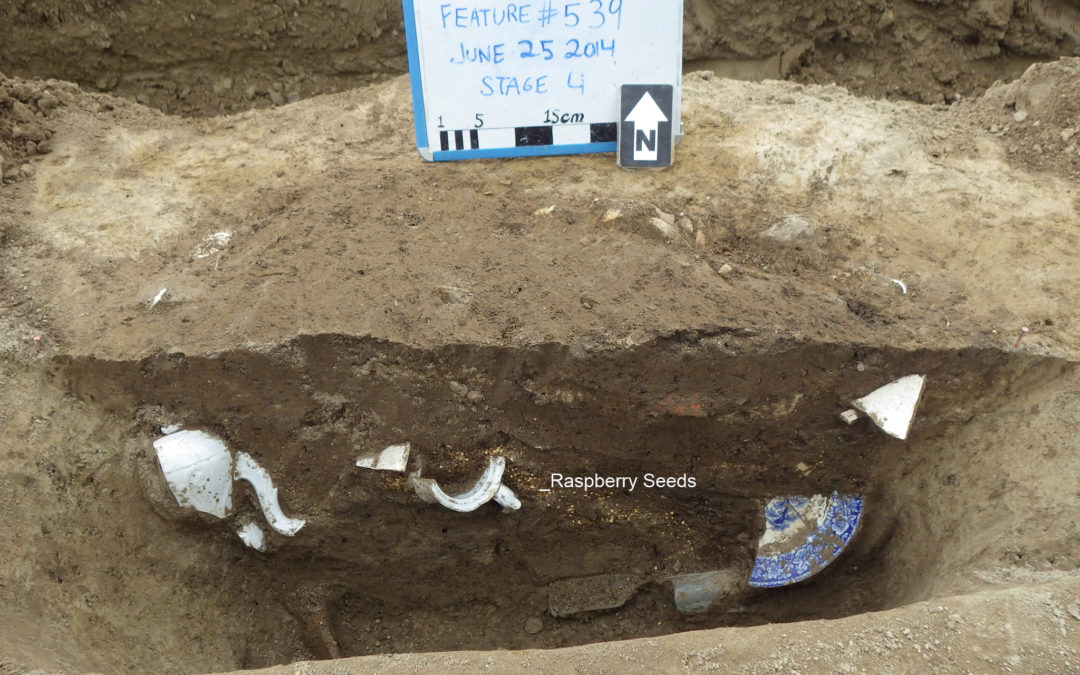 We’ve seen many amazing buildings and artifacts along our archeological

journey, however, one of the most interesting types of features we encountered on our excavation of 19th century Euro-Canadian sites are privy pits. They may not sound exciting to you yet, being that these were the holes that were dug under outhouses. On most of the sites my company has excavated during the past decade, we did not find any privies. I suspected this was due to these features being located a further distance from the houses in areas beyond the edge of our excavations. At Patterson Village, however, our excavations of the 18 houses in the village resulted in the discovery of 36 privies. What a find for us! There were two different kinds of privies we observed—pit privies and box privies.

Pit privies were simply holes dug into the ground that were generally oval in shape, and up to approximately one meter deep. The outhouse was then placed over this hole. Once it was full, a new hole was dug nearby, and the outhouse was moved over it. The old hole was filled in to cover its contents.

As for the houses at Patterson Village, we noticed some had one pit privy hole, while others had two or three. The plan view of one of the privies is shown in Plate 1 while a cross-section of this feature is shown in Plate 2. 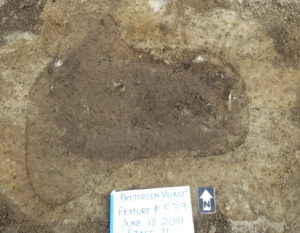 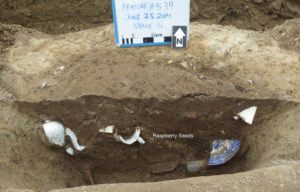 We like uncovering these privy pits because they produce a variety of unique artifacts that tell a story. We recovered 27,046 artifacts from the pit privies, including liquor bottles and patent medicine bottles which contained laudanum (a tincture of opium). We believe these bottles were discarded in the privy pits to prevent the discovery of their use by those imbibing such substances.

Privies were also used to hide broken items such a mother’s favorite candy dish, the remains of which would not be found, at least until an archaeologist dug it up more than a century later.

Privy pits were also used to dispose of food waste, which, otherwise would attract pests and flies. Another interesting stumble-on in many of these pits was layers of raspberry seeds. Why would that be? I now believe that these are the byproduct of making raspberry jam or raspberry cordial with the seeds discarded into the outhouse pit. Our excavations at Patterson Village recovered more than 1,000,000 raspberry seeds!

So now you know why we find privies so interesting. You never know what you’ll find, nor the fascinating clues of those who once lived here.

If you enjoyed this blog, feel free to share it with others. You don’t want to miss next week’s post where I discuss box privies.

Should you wish to receive my blogs and updates via email direct to your inbox, I invite you to take a minute now and do so here; it’s quick and easy.