Two structures on the same plot of land? In my last post, I discussed

what I thought might have been a raised storage building at Patterson Village. This was comprised of a rectangular pattern of very large posts/post moulds which defined a structure 14 m long and 7 m wide. I showed a picture of a raised storage building from the reconstruction of Fort William near Thunder Bay as one possible interpretation of what such a structure might look like. 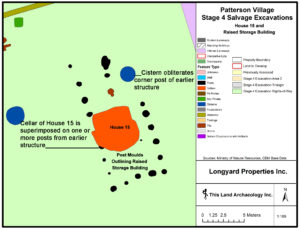 There was another interesting aspect of House 15. In my book on Patterson Village, I reported that our excavation of its cellar produced two fragments of dishes with maker’s marks which indicated that they had been manufactured in England sometime between 1891 and 1903. However, in revisiting the artifact catalogue, I discovered that there was a total of 18 artifacts with maker’s marks from Patterson Village (also incorporating the name of the country of origin, England), which indicates that these dishes were actually manufactured after 1891.

Although our work in archaeology is highly accurate and mostly science-based, given the vast number of artifacts found at Patterson, even the most experienced and professional individuals can misinterpret the available data.

There is one other aspect of the cellar of House 15; it did not contain large numbers of broken mortar which I interpreted as representing the moving of houses from the village to other locations in the township. This would have involved dismantling the chimney, removing the mortar from the bricks to allow their recycling. I cannot explain the lack of mortar fragments in the cellar of this house.

Such is the fascinating, yet mysterious world of archaeology . . .

More to follow soon on the closure of Patterson Village and what may have followed. If you’re new to Our Lands Speak blog, you may want to peruse my earlier posts that provide you with a little more background on The Archaeology of Patterson Village – A 19th Century Company Town in the Township of Vaughan, Ontario.