Our Lands Speak: Insights on the Patterson & Brothers’ Factory for Manufacturing Agricultural Implements 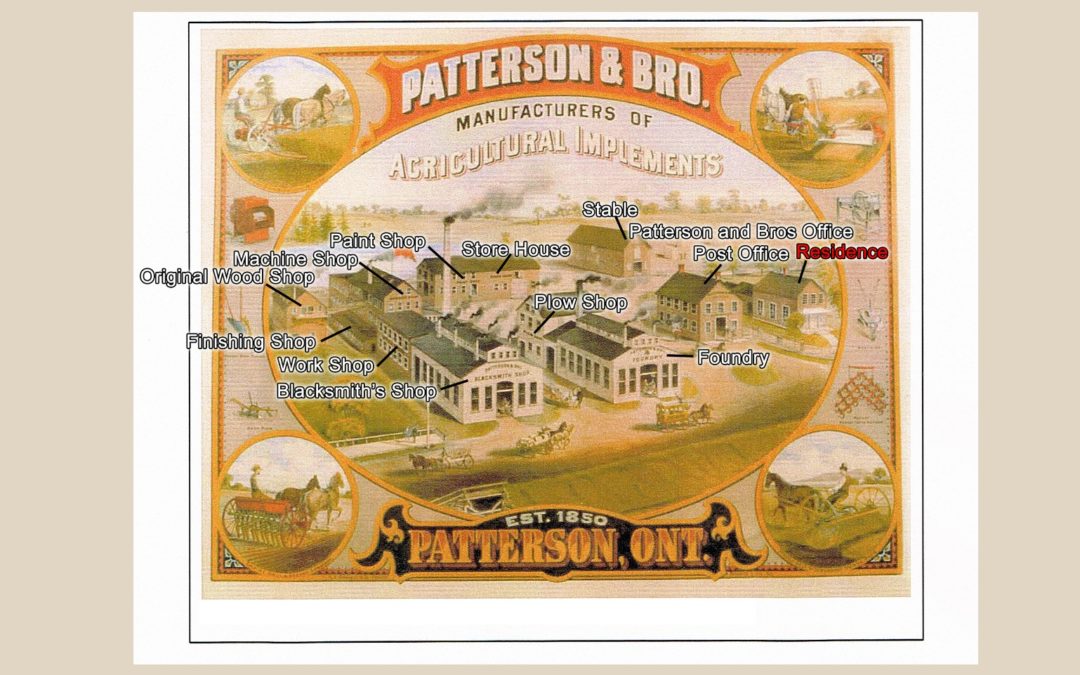 Patterson Village by This Land Archaeology Inc. between the fall of 2012 and 2014—as documented in my book The Archaeology of Patterson Village: A 19th Century Company Town in the Township of Vaughan, Ontario, published by I C Publishing (2017) in a new publication series Our Lands Speak.

This blog focuses specifically on the factory located just west of Patterson Village on an intermediate terrace of the Humber River. Unfortunately, the factory buildings located on the land developed by DG Group had been taken down after the abandonment of the village, and the space converted to use for farm buildings. Thus, the 2012-2014 excavations concentrated more on the company town of Patterson Village.

However, we have a very significant amount of historical information about the factory from newspaper accounts and from a large, colour lithograph produced in the 1880s. Copies of the newspaper accounts and other documents were provided in a digital format by Ruth Redelmeier, who has spent more than two decades researching the factory, the company town, the Patterson Family, and the Patterson businesses. Ruth wrote a supplement to my book on the Patterson family and their businesses. Ruth also allowed composite photographs to be taken by our photographer, Leslie Town. These we stitched together in Photoshop to produce a high-resolution copy of the lithograph. This reproduction has been used on the cover of the three versions of the book on the excavations and is also used elsewhere in the text.

The York Herald, a local newspaper based in Richmond Hill, published an article on May 19, 1881 which described most of the factory buildings, what the function of each was, how many people worked there, and their dates of construction.

The version of this lithograph presented above illustrates the function of each building, while another version of it is published in the book and shows the dates of construction.

One example of the descriptions provided in the York Herald was:

“The one-storey brick foundry, 74 by 42 feet with a high rook with skylights providing natural light for the daily casting of the iron farm equipment parts. Sixteen to 29 men worked here.”

There are two other aspects of the lithograph which are of special interest. First, it shows the Manager’s House in the extreme right-hand corner of the illustration. While this building was still standing in the fall of 2012, our subsequent excavations around it revealed no evidence of a 19th century occupation. There was no cistern, no privies or other features found as there were around the other houses in the Village.  This suggested to me that this house had been moved from its original location after the closure of the village. Towards the top of the illustration, there is a building labelled “Stable.” This is the location of a stone foundation we excavated in 2014. Of interest, there were no artifacts recovered from this building which would have suggested its function as a stable. This is a poignant reminder that it is often difficult, if not impossible, to determine the function of buildings found on Euro-Canadian sites without supporting historical documentation.

Photo Credit: The Lithograph of Patterson & Bro. Factory from the 1880’s is courtesy of Ruth Redelmeier