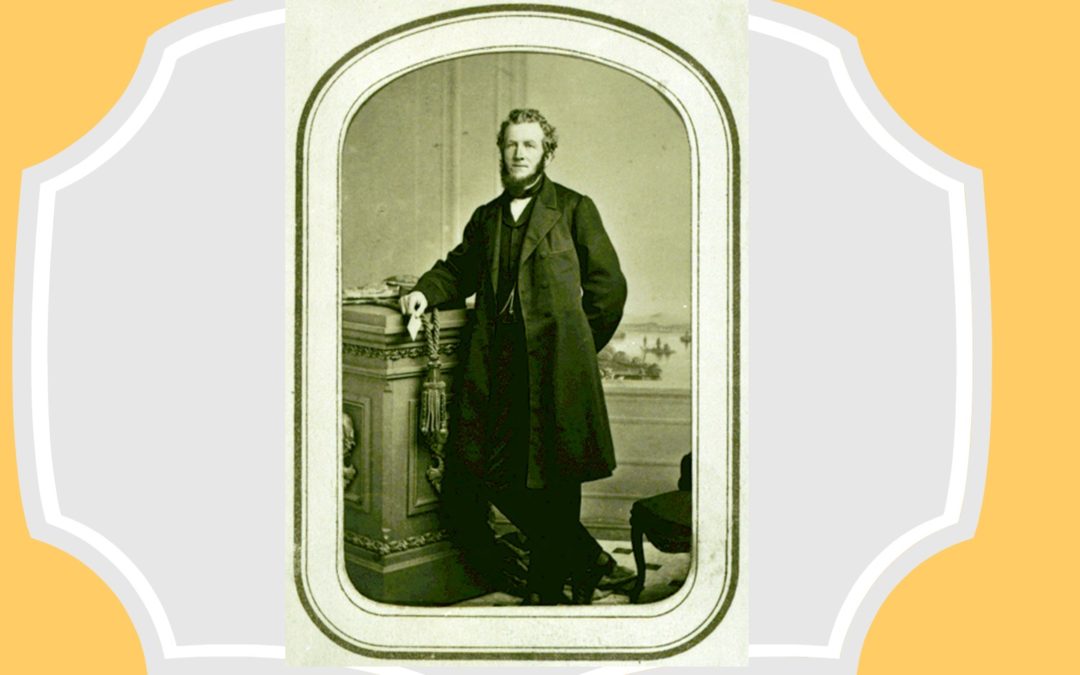 Happy 2018, and welcome back. This month’s blog posts will provide some deeper

insights into Patterson & Bro. Manufactory, Patterson Village, and the 2012 to 2014 salvage excavations my company, This Land Archaeology Inc. undertook at the site. Each of these articles will provide a small but fascinating glimpse into what you’ll find in the full-colour 192-page publication, The Archaeology of Patterson Village: a 19th Century Company Town in the Township of Vaughan, Ontario.

First, a few snippets about Peter Patterson and his family. Peter was born in New Hampshire in 1825. His family had emigrated from Ireland about 1735, and his father became a merchant and member of the legislature of New Hampshire. The family moved to New York State in 1829, where their father took up farming and his children learned business and engineering and started to manufacture farm implements.

Robert Jr. and Reuben, Peter’s brothers moved to Canada and set up a foundry in Dundas Ontario, and later moved to Belleville where they founded R. & R.S. Patterson Company to manufacture farm implements.

Thomas immigrated to Upper Canada (now Ontario) and settled in Richmond Hill about 1850. His brother, Peter, followed, and they began to manufacture fanning mills in Richmond Hill. Their business grew, and by 1853 they purchased Lot 21, Concession 2 in Vaughan Township just west of Richmond Hill.  Another brother, Alfred, joined their endeavour, although he remained a resident of the United States. By 1858, Thomas also returned to the United States and ceased to be involved in business. This left Peter as the main resident and Managing Partner of the business.

The manufactory began in a single building on Lot 21 and derived power from Patterson Pond, which resulted from the construction of a damn on the Humber River. Peter’s plan was to create a company town beside the factory. Unlike many owners of company towns, Peter was a paternalistic capitalist who looked after his workers and did not abuse them as the owners of many company towns did back then.

Peter held several public offices including Reeve of Vaughan Township and member of the Provincial Legislature.

The Archaeology of Patterson Village offers additional historical background on Peter Patterson and his brothers in Chapter 1. And even more details on the Patterson family and the Patterson businesses are can be found in a comprehensive supplement to the book, written by Ruth Redelmeier. Ruth’s family owned the land on which the village was located and Ruth has spent more than two decades researching Patterson Village and the Patterson family. After the sale of the property in 2012, Ruth moved to Port Hope. At 94 years of age, she continues her research and much of her data is available in digital form. She is a truly amazing woman and getting to know her has been one of the great pleasures in digging the site and writing about it.

In the coming weeks, I’ll share with you some very interesting discoveries we made about the Patterson Factory, followed by the Patterson Church.

If you don’t already have a copy of The Archaeology of Patterson Village and would like on, remember it is available in high quality soft cover, e-book in PDF, and iBook.

Photo Credit: The photo of Peter Patterson is courtesy of Ruth Redelmeier