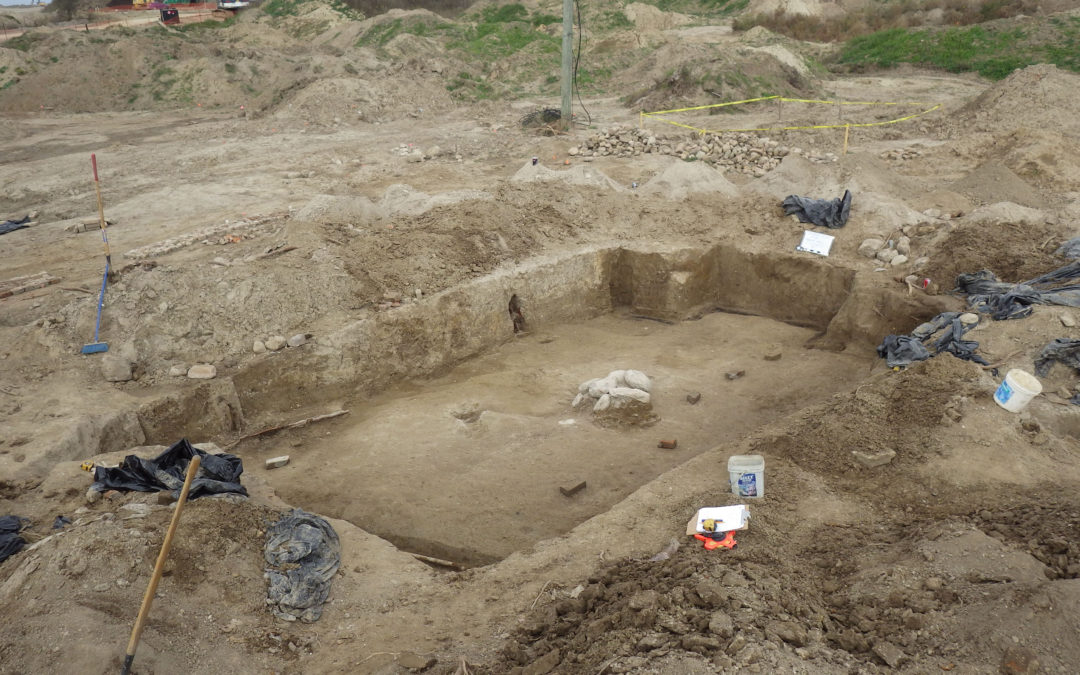 excavation is the boarding house we investigated, which was near the western end of the village fronting on what is now Major Mackenzie Drive. The boarding house was discovered in that part of the Village we called Area 2 located west of the North-South Right-of-Way.

We knew from archival research that there was a boarding house associated with the Village. The 1816 census data revealed that six men lived in two-storey boarding house, and that the numbers of boarders later increased to 20 to 30 men. Historical data also indicates that the boarding house was run by an independent individual, and that boarders were served with very good meals and accommodation (Finlayson 2017:104). 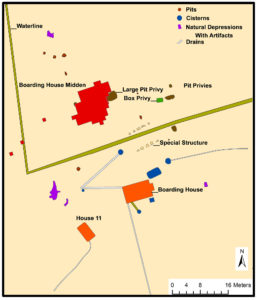 The identification of the boarding house during our dig was very easy, given the number of factors, some of which were that:

1)     The cellar was the largest we discovered;

2)     There were five cisterns associated with the boarding house indicating a large demand for water;

3)    A very large garbage dump (midden) was found about 20 m north of the boarding house; and

4)    A very large pit privy was located north of the boarding house.

The excavation of the boarding house cellar also produced a relatively significant sample of white clay smoking pipes, suggesting the presence of many men. The boarding house midden exposed substantial numbers of pieces of chimney glass from coal oil lanterns, as compared to middens in the village where children lived. I concluded that this suggested the absence of children where this midden was located, in that there was no need to protect them from this sharp glass objects.

In the excavation of the large pit privy, we discovered remnants of a coin purse which contained nine coins. The excavation of a box privy produced an amazing 11,926 artifacts, including 50 complete bottles and a variety of complete ceramic items including a tea pot, serving bowls, a spittoon, and two figurines. We have conducted Stage 4 salvage excavations on many other sites and, combined, found fewer artifacts than we recovered from this single privy. As I noted in the book, “This is can only be considered a once-in-a-lifetime discovery!” (Finlayson 2017:108)

The complete excavation of the boarding house and its associated features at Patterson Village (done by my company, This Land Archaeology Inc.) is quite rare in archaeological excavations of 19th century Euro-Canadian sites in Southern Ontario. We were incredibly pleased to experience such fascinating history.

I am booking several speaking engagements and book signings in 2018 to share more about 19th Century archaeology, and specifically The Archaeology of Patterson Village. Feel free to email me directly should you have any questions, and/or an interest in reserving a date for me to speak to your group.