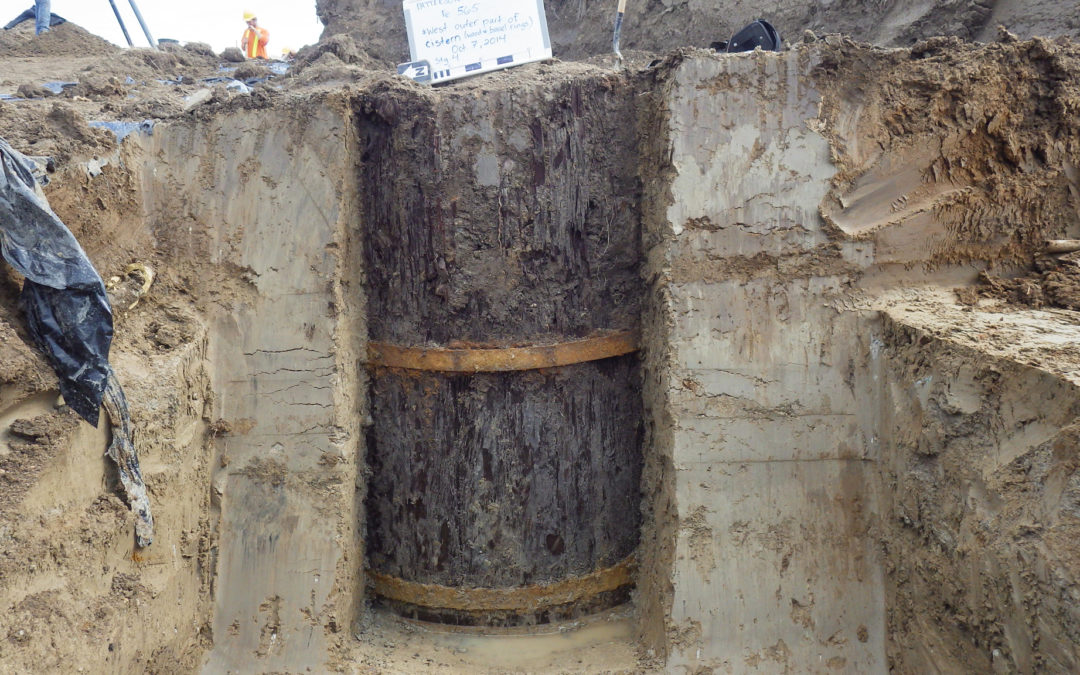 cisterns, a well, a water tower, and a cast iron waterline. Although not as advanced as our standards today, it is amazing how much thought and effort must have gone into the creation something so necessary and functional as a clean water supply.

This blog will discuss the cisterns, i.e. the water reservoirs, and the next blog will address the other three sources of water.

Three different kinds of cisterns were found, which were used to collect water for use by residents of the village. Five cisterns were manufactured off-site and inserted into circular holes excavated at the village. These cisterns were composed of wooden staves held in place by three iron bands, one at the top, one in the middle and one at the base. These bands were about 1.4 m in diameter and about 2.0 cm wide. Notches in the base of the staves held a circular wooden base in position.  Once inserted into the circular hole, the space around the outside was filled in with soil. For four of the cisterns, the wood had rotted leaving only the iron bands as indicators of cisterns manufactured elsewhere. In one case, the soil was waterlogged and much of the cistern was preserved. This allowed us to measure the staves and the base. In all cisterns, the upper iron band was missing, probably removed by the ploughing of the site. Four of the cisterns were spaced throughout the village indicating that these were water sources to be shared by the nearby houses. Further historical research is needed to determine where they were manufactured and by what company.

One of the diagnostic features of the boarding house was that there were five cisterns near it. Three of these were circular wooden cisterns manufactured off-site. One was a rectangular, comprised of a floor and walls made from planks of wood. Portions of the wood were preserved to indicate the structural nature of this cistern. This was unique in that there was a cast-iron pipe leading from the cistern into the cellar of the boarding house. This suggests that there was a hand pump in the boarding house used to pull water from this cistern. The final cistern was a rectanguloid structure 4 m long, 2.2 m wide, and 1.5 m deep with the sides and bottom lined with concrete.

It is quite interesting to see the improvements that were made over a few short years.  For example, at the boarding house, the first cistern was a square whole the sides and bottom of which were lined with cedar boards. The next three cisterns, required to provide a growing water supply for the increased number of men living there, were circular cisterns with three steel bands holding the staves in place. These were clearly manufactured off site and imported to provide a greater water supply.  And finally, a large cistern was created by digging a rectangular hole and lining it with concrete. Peter Patterson was a true innovator in many ways beyond the manufacture of farm equipment.

What do you think?

Next week we’ll discuss the three remaining sources of water for the villagers.