The first phase in revitalizing Wilfrid Jury’s museum involved changing reporting responsibility for the museum as a non-academic unit of The University of Western Ontario.  Under Wilfrid, the museum reported to the Office of the President, since the museum was effectively dormant by 1976. Thus, we arranged to have this responsibility transferred to the Office of the Dean of Social Science. This allowed the Dean’s Office to provide base funding for the operation of the museum. It also permitted us to explore the ultimate reporting structure for the museum.

For this exploration, the new Dean of Social Science, B.B. (Kym) Kymlicka, and I flew to Vancouver and met with Michael Ames, the Director of the University of British Columbia’s Museum of Anthropology.  The purpose of the meeting was to determine if the revitalized museum at Western should be part of the Department of Anthropology, as was the case at U.B.C. Professor Ames was quite adamant that the museum should be its own entity, preferably a separate corporation and a registered charitable organization independent of the University.

As a result of this trip, we decided to establish the museum as a UWO research centre which would accomplish what we had learned through Professor Ames, in that it would be a separate company with its own charitable registration. This corporate change took effect in February 1978 with the museum being called the Museum of Indian Archaeology (London) and referred to as “An Affiliate of The University of Western Ontario.” Once this restructuring was complete, the reporting responsibility for the museum then reverted back to the Office of the President and, as Executive Director, I reported to the Vice-President Academic and Provost.

The recognition of the museum as a revitalized non-academic unit of the university also allowed us to obtain space in Middlesex College where there was surplus room as a result of the recent opening of the new Social Science Building on campus. We obtained three offices, one for myself, one for our newly hired secretary, and an extra office for temporary staff. We also acquired two laboratories, a small one of several hundred square feet and a larger one which could be separated off from one of the cafeterias.  In addition, we e gained entrance to the basement of Middlesex College with its five-foot ceiling height, which served as an interim storage space for the hundreds of boxes of non-diagnostic artifacts recovered from the Draper site excavations. We were fortunate to have access to the University’s surplus stores. Here we were able to obtain desks, tables, office and lab chairs, and other furnishings which had been declared excess supply by other departments and were available for the cost of moving them to our new spaces.

These were interesting and challenging times. Funnily, one memory that speaks to this is a birthday card (Figure 2) quite aptly created by Rudy 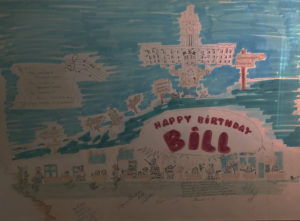 Fecteau and signed by the staff which is now framed and hangs in my laboratory. Rudy worked for us, identifying plant seeds and charcoal recovered from Draper and other sites we investigated. Forty years later, he is the leading authority in Ontario in this field of eco-artifact identification.

Feel free to share your comments or questions below, and I will respond personally where I can. If you’d like to learn more about Our Lands Speak series as a whole, I’m sure you’ll enjoy browsing further here on my website and/or at the I C Bookstore. I C Publishing now has all three volumes published and available in their bookstore, along with the first academic paper in the series—soon to be featured here too. And before you know it, we’ll be revealing our 2020 plans!

For now, we take a break in our examination of the revitalization of Wilfrid’s museum and, in the next two blog posts, we’ll unveil and briefly review Volume 3 of Our Lands Speak series which deals with the Yake and Windmill sites, two 19th century sites in the Town of Whitchurch-Stouffville.