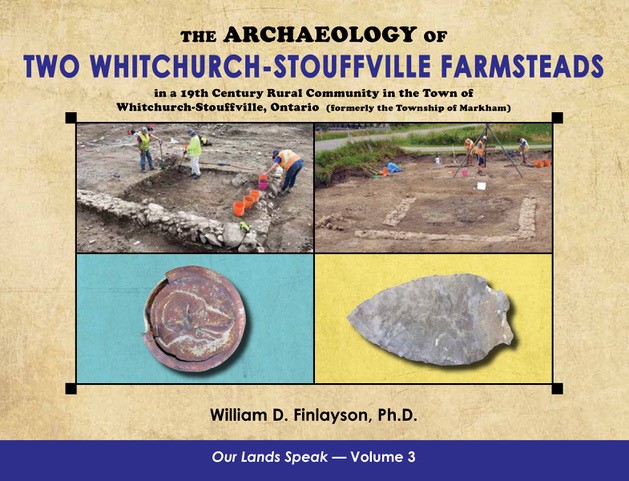 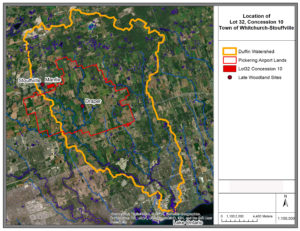 Sometimes, the coincidences in my work are just unbelievable. In 2016, we got a call from Fieldgate Developments to undertake an assessment of a newly acquired property on the 10th line in Whitchurch-Stouffville. Our assessment discovered two 19th century sites—Yake and Windmill. The Yake site was located at the west end of the land and was a rental property of a prominent Stouffville businessman, John Yake Sr. The Windmill site was located towards the east end of the lot and comprised two cellars, one a foundation for a log house built by one of the original owners of the property and a much larger foundation of a frame house constructed by Yakes’s son, John Jr., before he built the standing brick house in the early 20th century (Figure 1).

One of the fascinating aspects of this project was that the property was located within one km of the Mantle site, a very large Indigenous village thought to be occupied by the dwellers of the Spang site which had been inhabited by some of the people who occupied the Draper site that I had excavated in 1975, 1977, and 1978. Originally it was believed that Draper was occupied between about A.D. 1450 and 1480, Spang between about A.D. 1480 and 1510, and Mantle between A.D. 1510 and 1540 by ancestral Huron-Wendat peoples who subsequently migrated north to settle in Historic Huronia about A.D. 1600.

However, a recent carbon-14 dating of the Draper-Spang-Mantle villages by Sturt Manning and his co-authors suggest revised estimates that indicate that Draper was inhabited from A.D. 1521 to 1557, Spang from A.D. 1542 to 1592, and Mantle from A.D. 1586 to 1623. Most importantly, this study confirmed that Mantle was occupied at the same time as Cahiague, the very large Huron village visited by Samuel de Champlain in A.D. 1615 (Figure 2), near what is today, Warminster, Ontario. 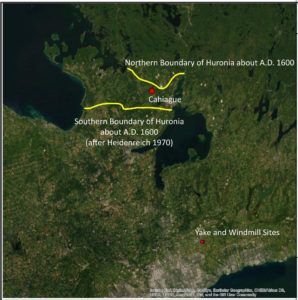 This study has major implications for our understanding of the Iroquoian occupation of southern Ontario. What is most important in this case is that the Draper, Spang, and Mantle sites could not have been occupied by ancestral Huron-Wendat, as has always been thought, but by a previously unrecognized group of Indigenous people. Were these Iroquoians? What happened to them remains a new mystery which will require significant new research. It is possible that this group disappeared perhaps as a result of the deadly European diseases which devastated many of the Indigenous populations of North America after the exploration and settling of eastern North America beginning in the 15th century.

As to the Windmill and Yake sites, they were located where the corn fields had been and previously used by the occupants of the Mantle site. When first settled, the forest cover of the farm would have been large pine trees which had grown up on the abandoned fields. What is perhaps surprising is that we found no evidence of the use of this land by the Indigenous occupants of the property in the 17th century. However, we did find a spear-point that was about 10,000 years old, probably a point collected by one of the occupants of the Windmill site and discarded in one of the cellars.

It’s truly amazing, the coincidence of excavating two 19th century farmsteads located in the agricultural fields of the Indigenous people who occupied the Mantle site (some of whom probably occupied the Draper site as well), while at the same time I’ve been actively reviewing our excavations at Draper from more than 40 years ago. As you know, Draper has been the subject of numerous previous blogs, and will be discussed further in future posts. One of the wonderful aspects of my work is that we never know where we will be working and what we are going to find.

More about these two sites and Draper in forthcoming blogs. You can also check out the newest volume of Our Lands Speak series in the I C Bookstore; it’s called The Archaeology of Two Whitchurch-Stouffville Farmsteads.

Heidenreich, Conrad, 1971 Huronia: A History and Geography of the Huron Indians,1600-1650. McClelland and Steward. Toronto.