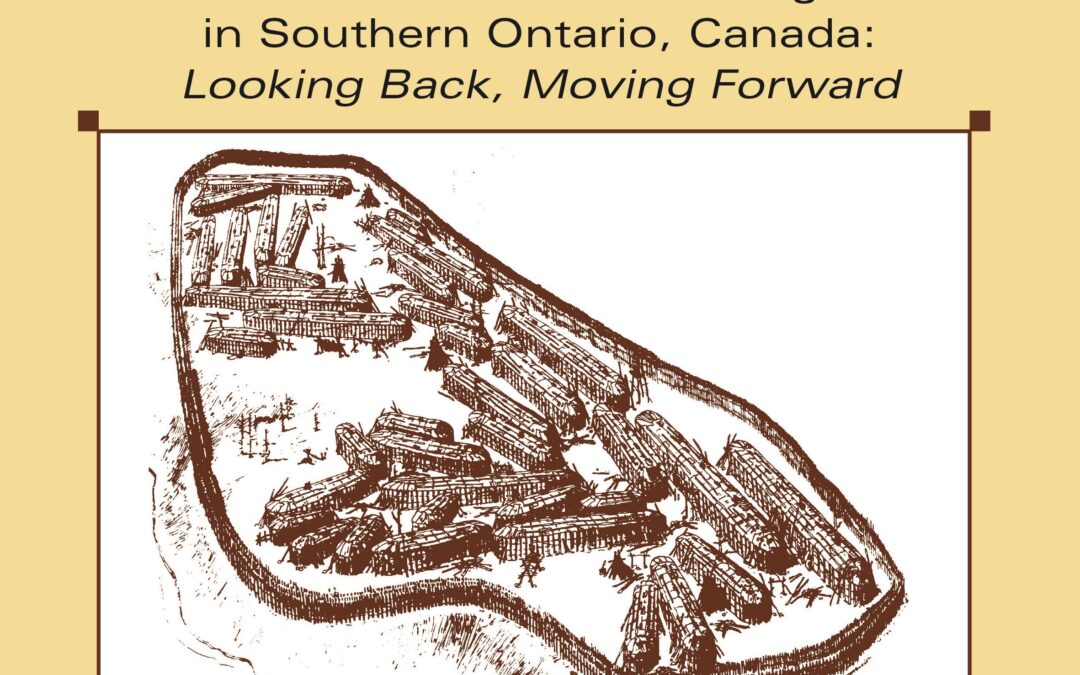 It has been a longtime coming and I am tremendously proud to announce the publication of The Draper Site, an Ontario Woodland Tradition Frontier Coalescent Village in Southern Ontario, Canada: Looking Back, Moving Forward, the fifth volume in Our Lands Speak series and what I believe is a groundbreaking study.

I reviewed more than forty publications, theses, articles, and unpublished reports as a prelude to the reconsideration of some of the key aspects of the Draper site. This includes presentation of a new sequence of expansions of the village, new perspectives on the use of defensive strategies in the planning of the village, and the presence of menstrual houses. Draper is used to define a specialized type of coalescent village, the Frontier Coalescent Village. This study provides new insights into the coalescence of at least five smaller villages, some from Duffin Creek and some from further afield at Draper, and the special mechanisms which made this possible and sustainable.

A major conclusion of this study is that Duffin Creek drainage was occupied by one or more communities of Iroquoians who were not Huron-Wendat, but rather a community of Iroquoians ultimately contemporary with the Huron-Wendat confederacy which occupied Huronia in the 17th century.

Duffin Creek drainage has been occupied by Indigenous peoples for more than 10,000 years. For many millennia Anishinabek peoples lived by Lake Ontario fishing for salmon and wintering inland in smaller groups.

Recently, Anishinabek Elder and Knowledge Keeper of the Michi Saagiig Nation, Gidigaa Migizi (Doug Williams) from Curve Lake published an oral history of the occupation of his people on their traditional lands on the north shore of Lake Ontario from Long Point in the west to Gananoque in the east called Michi Saagiig Nishnaabeg: This is Our Territory.

The use of Michi Saagiig oral histories provides new evidence in support of the migration theory for the occupation of south-central Ontario by Iroquoians in the latter part of the first millennium A.D., and I am honoured to have been able to spend a large part of my career as an Ontario archaeologist studying these Indigenous peoples, and to assist in some small way by writing their archaeological history. I express my gratitude to the generations of these Indigenous peoples for the traces they left behind which help all of us understand who lived where, when, and how.

It is a daunting task to recognize the many people and institutions who, over the past forty-one years, have contributed to the successful excavation of the Draper site, the White site, the archeological surveys, test excavations at the Pickering Airport Lands, and much more. I invite you to visit The Draper Site book page in the I C Bookstore as my publisher has included an excellent snapshot of this publication including the full acknowledgements, extensive table of contents, abstract, and forewords by Gidigaa Migizi and Joyce M. Wright, Ph.D.

In just a matter of days since the initial printing of this book, we’ve gotten it into the hands of close to fifty individuals for their professional and personal interest and keenness of the subject matter, as well as for initial comments such as already received (below) by James W. Bradley, Ph.D., Director Emeritus of Robert S. Peabody Museum of Archaeology in Andover, MA.

“Between 1975 and 1978, one of the most significant Iroquoian sites in the North America was excavated north of Toronto under the direction of William D. Finlayson. This was a rescue excavation since the site was located on property proposed for a new Toronto International Airport. Known as the Draper site, this project is important for several reasons. It was the largest Iroquoian site to be fully excavated. It was also the first time computer-assisted recording was used to map and manage the information on more than 170,000 analyzable artifacts, plus data points for the thousands of features, from a site 4.25 hectares in extent—truly a monumental undertaking.

Draper was a site that grew through a process of coalescence. What began as a modest village-size community with eight long and mid-sized houses grew through a series of five expansions into a town of more than thirty houses as well as an adjacent outlying village with at least six houses. For the first time, we could see how an Iroquoian community grew and changed over time. In addition, the computerized information makes it possible to pinpoint particular artifact types and styles. This gives us the ability to reconstruct who lived in and used these structures, an analytical tool that parallels the expansion of the site as different groups of people joined together to create it.

An initial report on this massive project was published in the National Museums of Canada Mercury Series in 1985. In itself, this was an amazing accomplishment—to process the information from such a large and complex site and publish a detailed report in less than ten years. Now, some thirty-five years later Finlayson has published a new volume summarizing the Draper site more completely and placing it within the context of other Iroquoian and Algonquian sites in southwest Ontario.

Taken together, the Draper project—Finlayson’s two outstanding reports as well as the dozens of specialized studies, theses, and dissertations this project has enabled—remains one of the most valuable archaeological records of northern Iroquoian people yet produced. Even more exciting, much of that story remains to be told as students and scholars continue to study this amazing site. Thanks to Finlayson’s dedication and persistence, that ongoing work is still possible.”

My gratitude goes to each of you who follow and support my work, and I am moved by the incredible momentum this publication has garnered in such a short time. The Draper Site is sure to take on a life of its own; perhaps it already has.