Previously, I mentioned I would be soon discussing the Draper South Field, a cluster of 7 longhouses located about 40 metres south of the Main Village. Before doing so, for some added context, it’s important that we first look at the 1974-1976 salvage excavation of the White site.

The White site was also subject to test excavation by the Ontario Archaeological Society in 1972 at the same time as our earlier work at Draper. In 1974, Grant Tripp, a graduate student at Trent University was selected to complete the excavations at this site. After finishing the 1974 field season, Grant joined our team and completed this project in 1975 and 1976. This followed with his preparation of a report on his excavations under my overall direction at The University of Western Ontario. 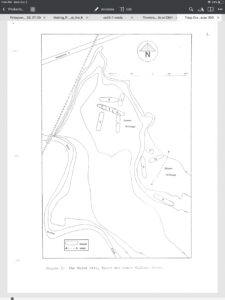 The White site is unusual in that it was located on two adjacent terraces on the east side of West Duffin Creek. On the lower terrace, Tripp investigated 7 longhouses, 4 of which overlapped others. On the upper terrace, there were 4 houses, 3 separated from a fourth by a row of posts which may have represented a fence.

The unusual location was notable since the sites had not be subject to farming over many decades.  However, even more significant was the fact that the houses were not in locations where we would normally look on an Iroquoian site.

In his unpublished report, Tripp noted 10 characteristics which suggested that the White site was a farm hamlet, occupied seasonally over many years. Among these unusual features were an absence of village planning and defensive planning in the placement of houses, which on the other hand was so prevalent at Draper. He also inferred a prolonged occupation based on the superposition of some houses, as well as the location of middens on top of some houses. The variable location of hearths and the low densities of pits within the houses was also noted.

A number of the artifacts recovered suggested that part of the White site may have been occupied at the same time as the Draper site. We know, from historical documents on the Huron-Wendat who occupied Huronia in the 17th century, that some families left the villages in the summer to live adjacent to their agricultural fields located at a fair distance from their village. On the upside perhaps, this would have also isolated them from the various unpleasant aspects of living in the large villages during the summer such as overcrowding.

Thus, the White site represents a different kind of settlement than villages such as the Draper site. As a seasonally occupied hamlet, its inhabitants would have returned to their village where they wintered.

Our surveys of the Pickering Airport Lands discovered two other sites which I believe were also likely seasonally occupied. These are the Robin Hood and Carruthers sites.

In terms of understanding the full extent of the occupation of the Duffin Creek drainage in the 16th and early 17th centuries, White, Robin Hood, and Carruthers, were seasonally occupied. Therefore, their estimated populations cannot be considered as true sources of the groups which joined the different segments of the Draper site.

With this background in mind, my next blog will discuss the Draper South Field.

As you may be sensing, there are many layers to this work, some quite complex, nonetheless fascinating. Should you have any questions about the snippets of sharing I do on my blog, don’t hesitate to reach out to me by commenting below or by email and I will respond personally as soon as I can.

For more information on Our Lands Speak publications by I C Publishing, remember, you can peruse the series here on my website or in more detail in the I C Bookstore.