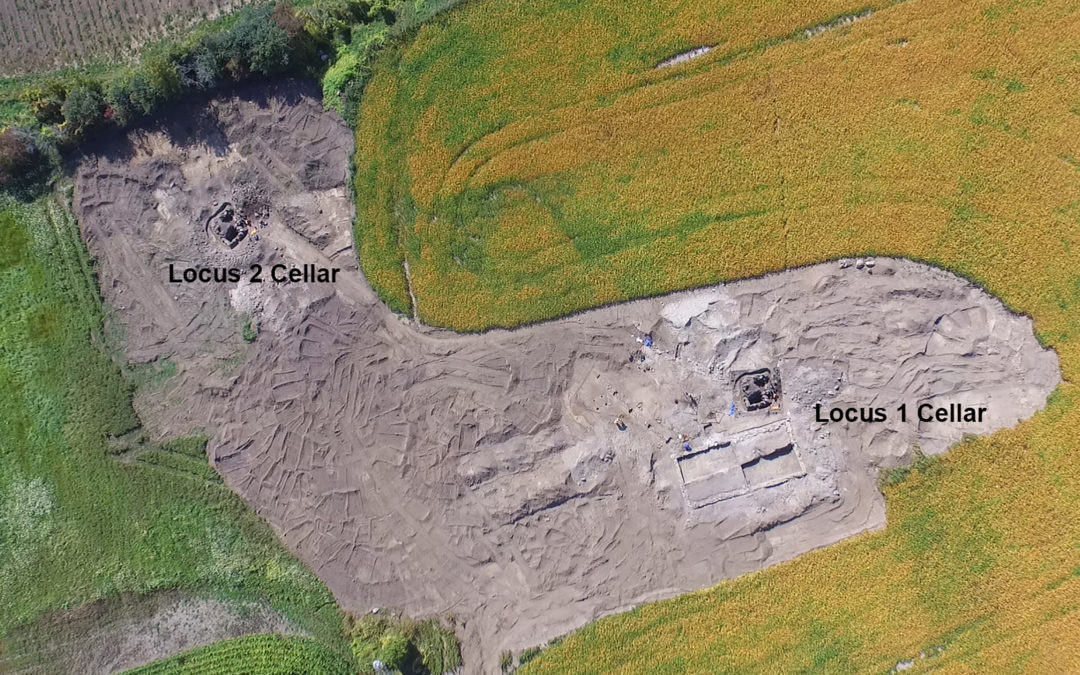 In my last blog, I reviewed our work at the Yake site, situated at the east end of the farm property just south of Stouffville, which we were assessing on behalf of Fieldgate Developments.

Towards the rear of that property we discovered a second location we called The Windmill Site, inspired by an old windmill still standing beside the site.

Our archival research indicated that this part of the lot had been occupied by a Phillip Reyston at the time of the 1851 census. He and his family of six lived in a one-storey log house, the foundation of which was 5 x 6 m indicating a building of 30-square metres.

Later, John Yake Sr. purchased this property and sold it to his son, John Yake Jr. It was John Jr. who probably built the larger second house of frame construction near the log home that had been previously occupied by Reyston.

We found the cellars of both of these homes which can be seen in the aerial picture taken by our drone (see the feature image above). The stone foundation for the second house is significantly larger, 8 x 10 m or 80 square metres, but it also supported a woodshed or similar structure which was 5 x 8 metres.

It was John Yake Jr. who also built a brick house early in the 20th century which was still standing on this farm at the time of our investigations. One of the fascinating features of our work on this property was that all three stages of housing found on many farmsteads in Southern Ontario were present here—the log house, the frame house, and the brick house.

Since the standing brick house had been constructed early in the 20th century, the second-generation frame house was torn down and the lower level of its cellar had been filled with thousands of artifacts dating back to the late 19th and early 20th century. Most of these were metal and we collected only a few as representative samples of the kinds of artifacts in use at the turn of the century.

One of the more interesting artifacts we recovered was a piece of red chalk, probably used to mark wood and metal. This had the letters J.Y. carved into it, clearly indicating that it belonged to John Yake. It is very rare to be able to attribute a single artifact to a particular person who occupied the sites that we dig.

When you think of the history of your own family and community, what do you recall? Are there mementos you or your family hold onto that could be considered historic artifacts one day? Have you recorded your childhood memories for the next generation to look back on?

Perhaps the holidays will serve as perfect time for reminiscing and sharing of each other’s experiences, for the young and old alike.

Wishing you a happy and healthy holiday and the very best for 2020!