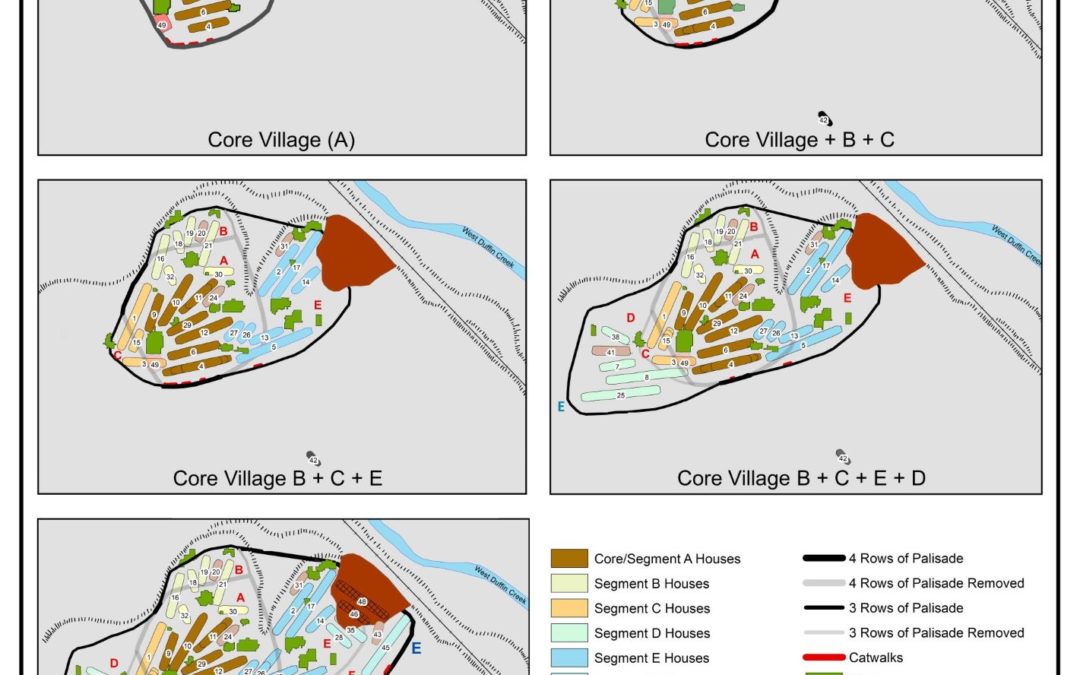 In a previous blog, The Draper Site: An Expanding Village, I detailed the expansion of the Draper site as it grew from a small community comprised of about 8 longhouses to become a very large village comprised of 41 structures.

In this blog and the next, I will discuss the defensive structures used in the construction of the Draper village. There are two aspects to this. First, the village was surrounded by palisades designed to protect the village from attacking war parties. Secondly, there is significant evidence that the size and placement of longhouses within the village were carefully planned to assist in village defenses. This blog will focus on the palisades, the next one on the strategic planning with respect to the placement of the longhouses.

We know from the historical documents—recorded by early explorers and missionaries who visited and lived among the Huron-Wendat peoples and occupied part of what is today Simcoe County in the first half of the 17th century—that some of their villages were surrounded by palisades to protect the residents from attacks by Five Nations Iroquoians who lived south of Lake Ontario.

Conrad Heidenreich, a geographer who wrote extensively on the Huron, provides in his 1970 book Huronia a description of one palisade from one village. The following was written by the French explorer Samuel de Champlain during his visit to Huron County in 1615-1616: “Fortified by wooden palisades in three tiers, interlaced into one another, on top of which, they have galleries which they furnish with stones for hurling, and water to extinguish the fire that their enemies might lay against their palisades.” This fits well with the palisades we discovered at Draper. Figure 1 (see main image above) shows one sequence of development illustrating the number of rows of palisades and the location of the galleries or catwalks.

To me, this suggests that during the occupation of the Core Village and again at the time of the construction of the last development the villagers were for some reason more fearful of significant attacks and chose to use four rows of palisades to provide the greatest amount of protection possible from attacking war parties. This is one example of the “town planning” involved in the construction of large villages such as Draper.

It is true that we’re experiencing unsettling times today, something most of us have never witnessed, however, can you imagine the demands of life for the inhabitants of Draper, let alone many other sites of the 17th to 19th centuries?

Our crews are finally back in the field, just as of last week which is much later in the season than usual. It will be interesting what this year will hold and what the new normal will be for all of us. We love our work and grateful to be back at it.

I am also pleased to have the opportunity to stay connected with you here on my blog, continuing to share fascinating snippets of yesteryear through the lens of my fifty-plus years deeply ingrained in archaeology, the study of human activity through the recovery and analysis of material culture.

Feature image: Figure 1, One sequence of expansions of the Draper site