The Draper Site: An Expanding Village 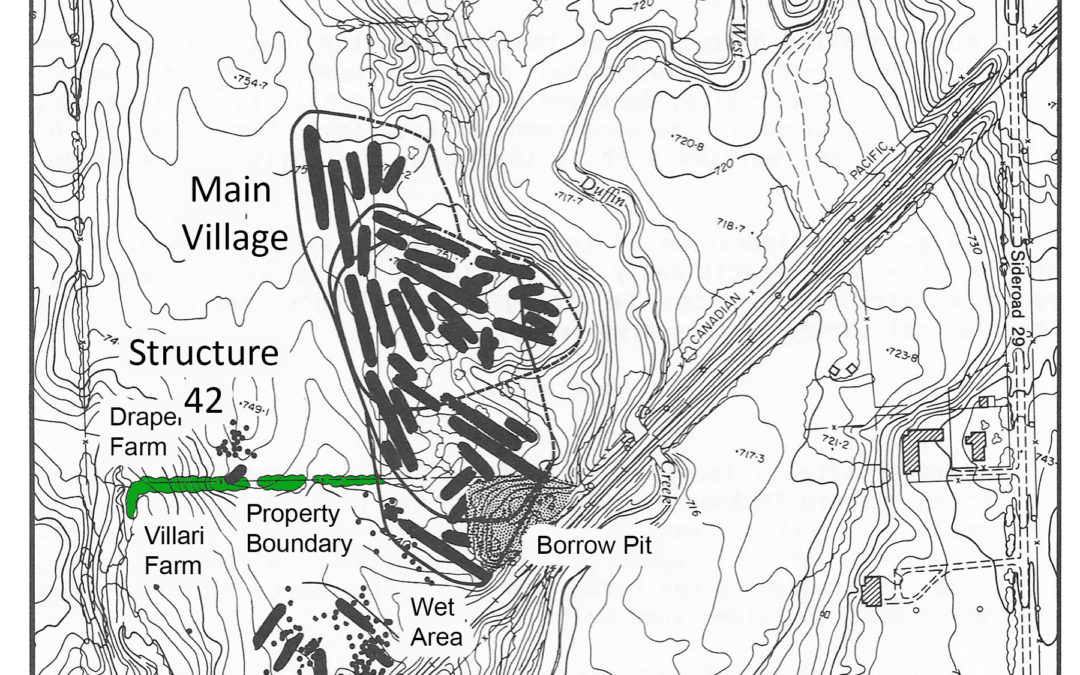 Our 1975 and 1978 excavations at the Draper Site revealed many fascinating aspects about this Iroquoian village which has traditionally been dated to about 1450-1500 A.D. Forty years after completion of our work, Draper remains one of the most significant excavations of an Iroquoian village in Ontario and perhaps Northeastern North America.

One of the most intriguing aspects of the site is that it began as a typical small community of about 8 longhouses in a palisaded village, 1.2 hectares in size. Amazingly, it expanded five times to become a 3.4-hectare village comprised of 39 houses, most of which were occupied at the same time, with an estimated population of 1,800 people. We refer to this as the Draper site Main Village. In addition, we discovered a cluster of seven longhouses located 50 m south of the Main Village which we refer to as the South Field, and a single short longhouse 80 m southwest of the Main Village which we refer to as Structure 42.

Determining when the different segments were added to the Draper village was a major challenge for us. In 1985, I published a 600-page book in which I addressed this and other questions about the site. At that time, I proposed that the village grew in a fashion illustrated in this figure and as follows:

There are other aspects of the expansion of the village which I will explore in future blogs. However, in case you missed it or are new to my blog, be sure to refer to the series I’ve written here so far about Draper including Early Excavations Part 1 and Part 2, Digging for Houses and Palisades Part 1 and Part 2, and Digging Middens (Garbage Dumps).

For more information about Ontario archaeology including our other work and book series on Patterson Village and Queensville, you can click on either name. The third in the series will be released in the fall. Stay tuned.

I will be available throughout the summer and fall seasons for book readings and presentations, ideal for your local library, special interest, and historical societies. Feel free to email me directly to inquire and/or arrange.