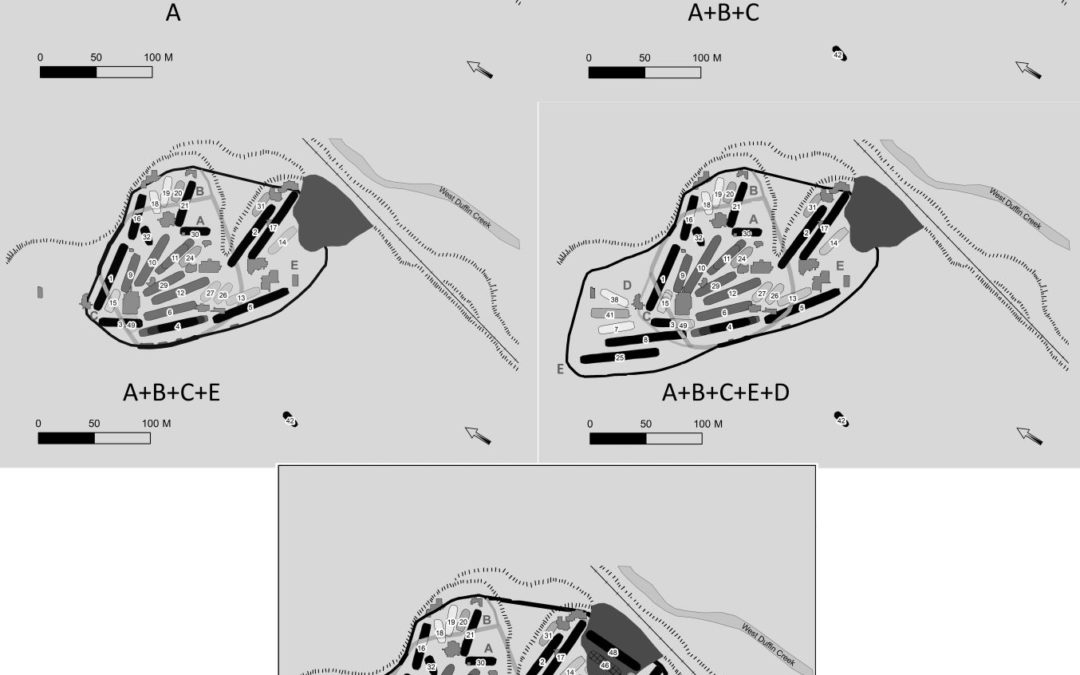 In this blog I want to discuss the additional planning that the Iroquoians—who lived at Draper and who moved into Draper—undertook as the various expansions of the village were constructed. As you will see, there was significant planning and I believe that much of this was of a strategic nature. Its specific purpose was to position longhouses to provide additional defensive barriers to assist in the protection of the village from groups of warriors who had breached the palisades and were trying to further infiltrate.

The original eight houses comprised a Core Village. There are three important observations about this Core Village.

I now believe that it is possible that the Core Village was set back 30 m from the break in slope to allow for the addition of Segment B to the village.

In the above figure, I have shown the addition of Segments B and C as if they were made at the same time. The reason for this is that there are substantial changes in the layout of the village which are suggestive of strategic planning related to the defense of the expanded village. In Segment B, this involved the placement of the two longest houses on the outer edge of this village segment, while for Segment C, the longest house was placed parallel to the new palisades to the northwest. In addition, a shorter house (#3) abutted the palisades, thus creating a cul-de-sac which would have hampered movement within this part of the village. I also believe that House 4, the southwestern most house in the original Core Village was expanded to reduce the distance between it and House 3 thus restricting access to the central part of the village.

This placement of the longest houses to provide additional defensive barriers within the village is also seen with the addition of Segment E. Here, two very long houses are placed beside each other and parallel to the gully which led down to the creek. The parallel placement of the houses created a long narrow corridor which would have been easily defended. At the southwestern edge of Segment D, House 5 was placed parallel to the palisades here and in line with House 4 which had its southeastern end extended to again reduce access to the central part of the village.

With the addition of Segment D, we again see the placement of two very long houses parallel to each other and to the new palisades, creating a long, easily defended alley between the houses. Further, House 8 is positioned in line with House 4 and 5 creating linear barrier of 218 m with only two openings 4 m wide between these three houses.

And finally, with the addition of Segment F, again a very long house is not only placed parallel to the palisades, but one end abuts the palisades creating another cul-de-sac. I also speculate that there would have been another very long longhouse placed along the eastern edge of Segment F. Unfortunately, this house had been destroyed by the creation of a borrow pit for fill for the construction of the railway beside the site in the 19th century.

From this discussion, it is clear that significant decisions were made about the placement of longhouses as part of the planning of the village expansions at the Draper site. Such detailed village planning is extremely rare in the archaeological record of Iroquoian sites in Southern Ontario, although additional instances of this may come to light as more villages are subject to complete excavation.