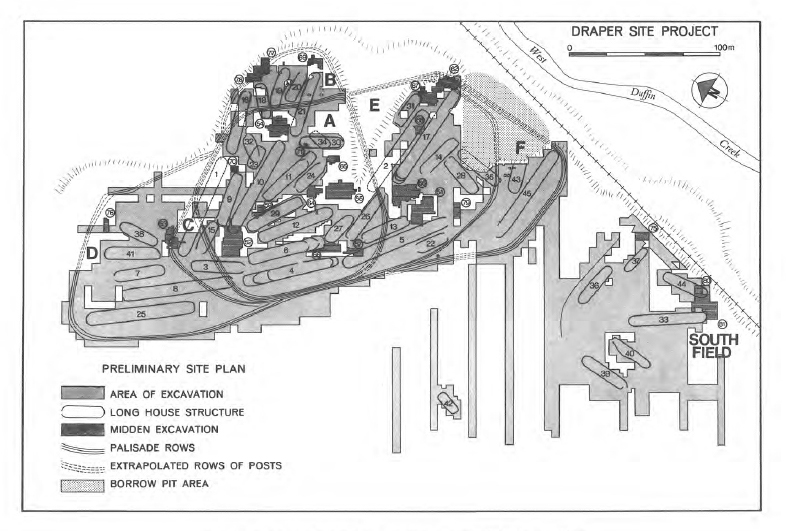 We discovered 7 houses about 40 metres south of the Draper Main Village. Two of these houses overlapped, with one being shorter. I believe the latter may have been lived in by the workers who built the rest of the houses. There was eventually a total of 6 houses separated from the Main Village by a fence, and likely occupied at the same time.

One of the challenges has been trying to determine the exact relationship of these 6 houses to the Main Village. We have not been able to fully investigate this since the initial study of the pottery vessel fragments recovered from this part of the site was never completed in a satisfactory manner. As a result, we have to use the nature of the houses themselves in order to gain preliminary knowledge of this site.

If the South Field houses represent a seasonally occupied hamlet like the White site, I am now inclined to suggest that they could have been inhabited seasonally by the people who lived at the Spang village, the site occupied after Draper.

In order to further pursue, we really need to complete the analysis of the pottery from the South Field houses, as well as the plant and animal remains recovered from both sites. Only once this is completed will we understand the relationship of these two likely seasonally occupied hamlets to the major villages such as Draper and Spang. Unfortunately, funds for this kind of research are limited, and this remains a problem for a future generation of archaeologists to tackle.

Many mysteries remain, although we press on, elated when we uncover another piece of the puzzle.